On Monday, I was driving forward through the intersection at Raymond/University in St. Paul. I had a green light, and a guy took a left hand turn and smashed into me. He said he didn't see me. My car is being considered a total loss. No injuries to report except some soreness in my neck and an almost constant headache.

On Tuesday, I dropped my iPhone in the toilet at the state fair. Gerg is experimenting with fixing it, but I've got to admit I'm skeptical. Right now, he's got it buried in clean kitty litter.

I'd like for that to be the end of me totaling things for awhile. Sheesh.

UPDATE: Finally went to the doctor on Friday. That neck pain is a sprained neck. That constant headache is a concussion. 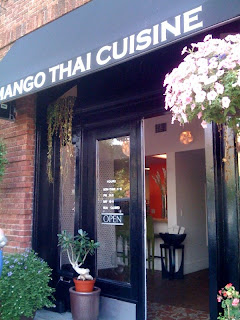 We lunched at Mango Thai in St Paul this week.
Almost immediately, we noticed the similarity between the menus of Mango Thai and our favorite Minneapolis Thai restaurant, Chai's Thai, and our server confirmed that Mango Thai was opened by the same owners as Chai's Thai.

Opened roughly 2 months ago, Mango Thai features most of the same good menu items featured at Chai's Thai: the papaya salad, the Singapore noodles, and the green curry, to name a few. They also offer the same budget-friendly prices. 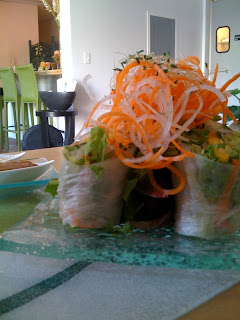 The staff is casual and friendly. The atmosphere is similar to Chai's. Small tables, simple but elegant decor. The benches built for maximum seating around the tables were a bit too short for me, but I am short to begin with. For taller patrons, they seemed to be a more suitable height.

If you like Chai's Thai, as I do, then I'm willing to bet you'll like Mango Thai.

I attended my first annual Bratstravaganza this weekend, and let me tell you, it was BRAT-tastic.

The theme was, of course, bratwurst.

Our hosts treated us to beer boiled grilled brats, brat kabobs, bratza, and brats in a blanket. Another guest concocted some brat fondue. For the veg heads, meat-free brat versions of the dishes were served as well.

The bratza was a flatbread pizza served with baked brats and caramelized onions, on a crispy and chewy crust.

The brats in a blanket were a home run for me because they were kitschy, and the buttery flavor of the "blanket" was an unexpected pairing with bratwurst. 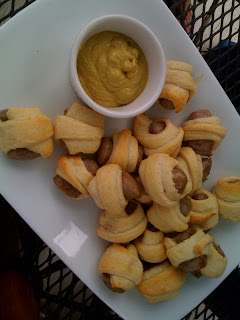 Guess it's time for another super unscientific blog poll.

PedalPub: It's All Good in the Hood

MNBeer helped a sister out by posting an update about the PedalPub.

Here's what the friendly, beer-loving site had to say:

"I ran into an alarmed blog post or two (via east-lake.net) regarding the PedalPub and it’s fate in Minneapolis. I dropped Al a line to check on this and you’ll be glad to know that the hearing was actually just a meeting to discuss regulating the PedalPub. Al says there are no changes in store for now, and probably nothing until next year. He also mentioned that creating regulations will be a collaboration between the city and the PedalPub that he expects “will go smoothly and professionally.”Fear not pedalers!"

About six months ago, I started participating on paid, blind taste test panels.

Now, it's not totally random. I had to take prelims in order to qualify, and I've gone through weeks of training to better understand the "complexities of aroma and flavor." Panelists should be able to detect trace amounts of fresh cream, malt, salt, or soy by aroma and flavor. I can now tell the difference between astringency and chalkiness, which I find cool for some reason.

I know! It sounds exciting, but it's not like I get to sample bbq pulled pork or bing cherries everyday.

For instance, for the past 3 months, I've been participating in a blind taste test study in which we scale vanilla flavored nutritional beverages. 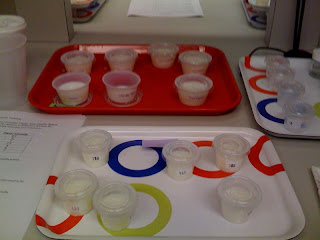 But all of this work has finally paid off, ladies and gentlemen. Because the dream has finally come true..........

The Fate of Minneapolis' PedalPub I got a note today which made me feel slightly uneasy.

"Minneapolis City Councilwoman Lisa Goodman is beginning hearings on the fate of the PedalPub in Minneapolis this upcoming Monday, August 11 at 2:30pm. "

What's up with that? What's going on with the fate of the PedalPub?? I'm not sure, but I'm writing this blog entry to show my support for the PedalPub. I'm totally smiling on the PedalPub!
What is the PedalPub?? PedalPub was created in the Netherlands, and Minneapolis is home to the only PedalPub in the United States. It's a huge, 10 person bike with one steering wheel. Your crew makes merry while you all pedal along a designated route. A sober and experienced PedalPub employee steers the rig and is in charge of the brakes. Your crew provides the power and the drinks, snacks, and jams.

Last weekend, we took the PedalPub out along the Nord'East route. We all showed up at the 1029 Bar at 2pm, and received some basic training from the PedalPub employee. We showed our IDs and signed our waivers. Then, we all hopped aboard and started pedaling. It's immediate fun; the sound of the gears whirling, the laughs, the music, the breeze in your hair, and even the pain in your legs as you pedal uphill.

We chose to stop at Tony Jaros' River Gardens, Grumpy's NE, and Mayslack's along the way. Our ride lasted about 3 hours with those 3 stops. Spectators waved, hooted, took photos, and smiled at us along the route.

I was able to spend some of gerg's hard earned cash in 3 bars that I've never visited before, but the best part was good times with friends in a little neck of the non-woods.

Note: If you're shorter than 5'5", your feet have a harder time reaching the pedals, and you'll probably end up with a sore rear end. Up to 16 people can ride, but only 10 can pedal, which means you can swap seats if your hind end starts to hurt. *wink*

Interested in helping the PedalPub preserve its future in Minneapolis? Take a moment from your busy day to write to your City Councilwomen Lisa Goodman and Elizabeth Glidden; share with them your positive stories about the PedalPub.
Lisa.Goodman@ci.minneapolis.mn.us 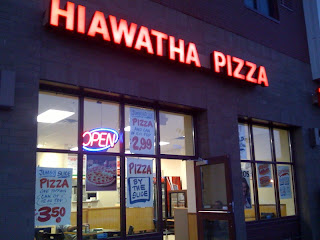 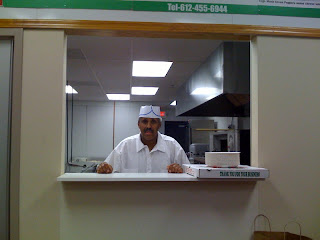 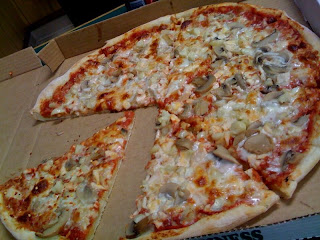 There's this guy who rides his bike around our neighborhood rocking a boom box in a five gallon bucket on his shoulder; he blasts hip hop with heavy bass.

It always makes me smile. And I always pause to appreciate the awesomeness while smiling.

This crew in Queens takes it to a whole 'nother level. It's seriously off the chain.

Check out the awesomeness of the tricked out BMX bikes Made in Queens.

I've got to catch this film.
No comments: