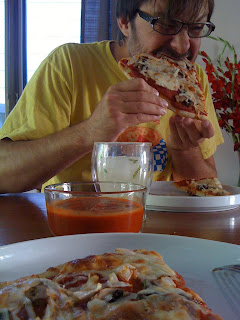 We used a simple preparation to cook the meat, since we wanted it to be adaptable to several recipes:
Place half of the thinly sliced onions in bottom of slow cooker; add pork, water, and 12 oz of beer. Top with remaining onion slices. Season with salt and pepper. Cover and cook on LOW for 8 to 10 hours. Remove the roast, shred the pork into pieces in a separate container. Drink the other 12 oz of beer. Word!

Scoop up 8oz of the prepared pulled pork, place it on a whole grain roll, top it with Kansas City style sauce and old fashioned coleslaw.

We served ours with roasted brussels sprouts on the side, which are the bomb-diggity.

Cut brussel sprouts in half, lengthwise. Toss brussels sprouts with olive oil, truffle salt, and pepper. Arrange, cut sides down, in a 17- by 12-inch shallow baking pan. Roast, without turning, until outer leaves are tender and very dark brown, 40 to 45 minutes.

Warm 8oz of the leftover pulled pork, place it on a piece of whole grain toast, and top it with BBQ sauce. Slice up some SweeTangos for a sweet and snappy side dish.

Meal Three:
Pulled Pork Gyozas (potstickers) with Steamed Vegetables
Finely chop the green onions. Grate the ginger and garlic cloves. Mix all the ingredients (except for the gyoza skins and oil for frying) in a bowl. Let the meat marinate for about an hour, if possible. There are many methods for cooking gyoza. I like this one: http://www.doobybrain.com/2010/04/10/cooking-yaki-gyoza-with-a-dog/

Prepare a crust or buy some pizza dough.

Place the yeast and honey into the warm water. Stir other ingredients together. Pour the yeast mixture into the flour mixture. Stir until combined. Form into a dough ball. Let the dough rise in a covered bowl until it doubles. Beat it down. Roll it out. Sprinkle your pizza pan with cornmeal. Place the rolled out crust on the pan (slightly prebake the crust before adding toppings if you want a super crunchy crust).

Top the crust in the following order with pulled pork, sliced red peppers, sliced crimini mushrooms, diced cipollini onions, fresh grated garlic, fresh sliced mozzarella cheese, and grated Parmesan. Serve with your favorite sauce on the side, dude. We made our sauce with rosemary and basil, and it was boss.

We served our pizza with basil vodka lemonades.