I was excited for NYC, but I was feeling a bit rundown on Friday after a long meeting in Kansas City which came to an exciting finish as the gentleman seated next to me puked all over himself on the plane as we landed in Minneapolis. Sheesh.

But being a north woods girl, as soon as I saw Manhattan from the window seat that Saturday evening, I was fully revived and ready for some hot, city action. We spent our first night wandering, heading down to Times Square, stopping for a slice and several cocktails en route. 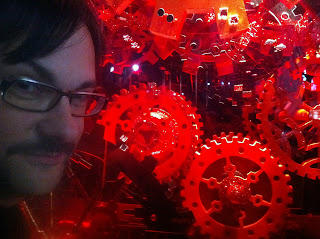 We saw a Macy's window display with gears in it. gerg likes gears.
I woke up on Sunday morning with a cold, but that didn't stop us from heading to the West Village to catch the Packer game at Kettle of Fish, where we ran into a crap-ton of Packer fans. MANY high fives were thrown about. 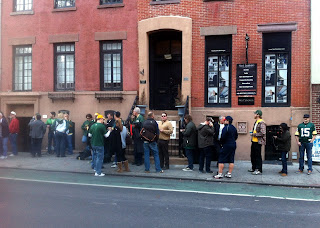 Standing in line at the Kettle of Fish in Greenwich Village awaiting admittance.

Later that night we celebrated a ripping Packer victory with drinks at Barramundi bar on the lower east side and dinner at wd~50, Wylie Dufresne's NYC restaurant. wd~50's atmosphere is sophisticated, casual, and somewhat SEXy. Neither too forward, nor too aloof, our server seemed like she'd always worked there, and was happy to be there.

The food at wd~50 was trickery on a plate. The aerated foie gras inspired in gerg a new appreciation for foie, so much so that he ordered it at Le Bernardin the following day. The wagyu chuck steak was rich, slightly salty, and figgy. We ordered the dessert to split, but our server said the chef insisted that we each have our own, and brought out two servings - both of which we savored. 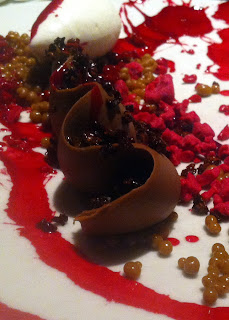 Monday morning came early, and we had to get to the National September 11 Memorial Museum for our scheduled tour of the outdoor space. The pools are huge, as is the space. That we couldn't see the bottom of the fountains within the pools was unsettling, but we both agreed that we were ok with feeling unsettled. Slightly eerie, very much overwhelming - we saw children playing tag among the trees while adults wept in solitude. 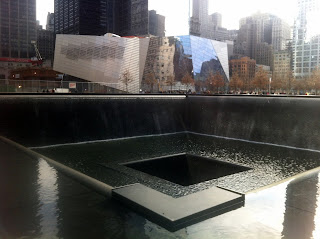 One of the twin reflecting pools at the 911 Memorial.
Our visit to the memorial was cut short because we had a lunch date a Le Bernardin. The place was gorgeous - from the upholstery on the suede and chrome chairs, to the tiny bubbles on the dinner plates, to the buttons on the maître d's jacket. The 24-foot triptych painting of a stormy sea called "Deep Water No. 1" by Ran Ortner of Brooklyn, pushed the aquatic theme to the forefront. Our meal was captivating, from the foie-topped shrimp to the crispy black cod. I did not catch a glimpse of Ripert, but I did catch a glimpse of the coat check girl's *ahem* décolletage - scandalous! 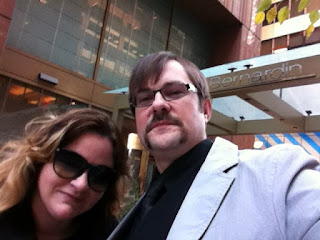 Getting our tourist on in front of Le Bernardin.
Have you noticed gerg's facial hair tribute to Pete Vuckovich? He received a couple shout-outs from passersby on his sweet, Movember moustache. With gerg's 'stache in tow, we headed to Brooklyn, where we stopped by NYC Resistor, a hacker collective with a shared space. We met some geeks. Gerg felt comfortable. A trip to Brooklyn wouldn't be complete without a stop at Grimald's, in DUMBO, so we swung by. The line was short, so we stopped for a pie -piping hot cheese, sausage, pepperoni, onion, and garlic on a coal charred crust. 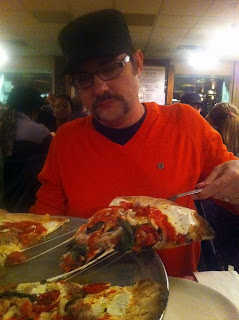 Pizza at Grimaldi's, under the Brooklyn Bridge.
Eventually, we headed to 4th Avenue Pub in Park Slope to meet up with some old friends from Minnesota, Bryn and Micycle. I had an imperial oatmeal stout from Southern Tier Brewing Company. It was roasty, dark, bubbly, and a good fit for a rainy night in Brooklyn. The subway ride back to Manhattan was quiet, since everyone in the car was sleeping except for us. Snooze fest!

We spent all of Tuesday in Central Park. We started at the upper west corner and worked our way down. It was hard to believe that the trees, water falls, and woodsy feeling of the North Woods at the Ravine were so close the madcap streets of Manhattan. Gerg was pumped that he finally got to peep the Jacqueline Kennedy Onassis Reservoir. 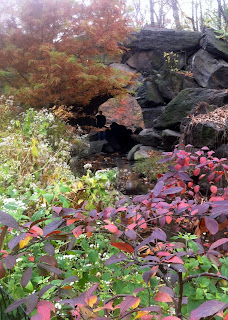 The Huddlestone Arch at Central Park. Can you spot gerg? 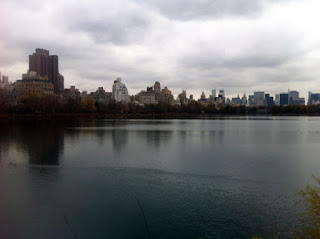 The Jacqueline Kennedy Onassis Reservoir.
After our tour of Central Park, we embarked on a train, and then caught a ride through the Berkshires, and ended up in North Adams, MA, where we celebrated Thanksgiving with friends who excelled at celebrity trivia and looking good. 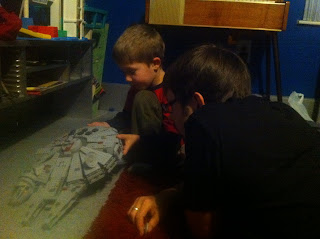 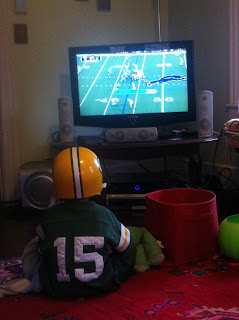 We watched another ripping Packer victory. 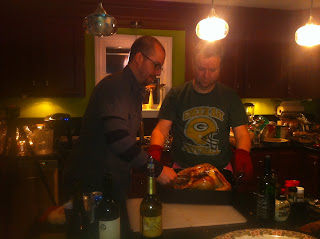 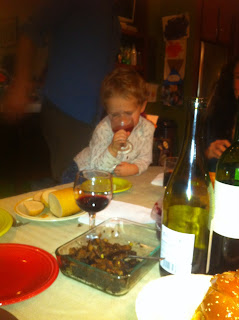 We imbibed.
The end.


Of COURSE that's not wine - what's WRONG with you?

Looks like an amazing time was had by all. Brings back memories of our spring honeymoon in NYC. We LOVED WD-50 (that peeky toe crab roll was a delectable study in contrasts). The food at Le Bernardin was aces, but the atmosphere was too stuffy to make it a super fun visit. We had to hit Manzo (in Eately) to see Eric Ripert. Go figure. Welcome back!!

Thanks, Lynne. wd~50 delivered, more so than we thought it would. I even figured out the restroom door!

I had the exact same reaction to the "stuffy" atmosphere.

Seems like that you had the best time there and I think that it was pretty lucky to have witnessed all the places in such short time. Well I am happy to see you enjoyed yourself in New York.

It is really great post and i really enjoy when i am reading this article. Thank you for sharing this great post with us. It is really happy to see this. picbear