Iron Fork Review and Other Bits

Okay, I'm not posting my latest in chronological order. I really want to address Iron Fork first (held on Nov. 9, 2006 in Minneapolis). IT WAS FUN! The bad news is that I forgot my camera!! 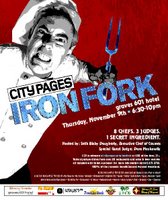 Sarah and Reed and I met up at O'Donnovan's for a cocktail before heading to the event at the Grave's Hotel. O'Donnovan's has a great selection of Irish whiskey, I helped myself to a glass of Bushmill's neat. Then Sarah and I headed over to the hotel. They had advance tix, but I couldn't get one. The line was LONG to purchase tickets, but it gave me a chance to check out the lobby of the Graves, which is contemporary and clean. Jeers to the line-butters! What happened to "Minnesota friendly?" (Hey, if you're a line-butter, and you know if you are, you SUKK.) Good news is that I got a ticket. The event was sold out, so I heard from other guests. Tickets at the door were $30, with proceeds going to Second Harvest.

So we all piled in an elevator (couldn't find the stairs), and headed to the 5th floor ballroom. Checked our coats, and walked through the cash bar area to the ball room, where 8 cooking stations were set up in a oval around a table piled with an assortment of fruits, veggies, broths, Amstel light, and meats. "Amstel light?" you ask; they were a major sponsor of the event.

Around the perimeter of the room, guest vendors set up their stations, and handed out gobs of free samples. Some highlights: the Legacy Chocolates samples (99% chocolate truffles!), the folks from the Birchwood with a cheese and cherry chutney appetizer, Ichiban brought 1000s of sushi rolls and enough wasabi to launch a rocket, the Melting Pot people brought a refreshing salad with greens and currants, and Lunds made mini-grilled ham and cheese sammiches with tomato soup. Bottom line: If you left hungry, you were lazy. All the vendors I approached were so friendly and generous with their goodies!

On to the competition! I grabbed a spot early. I parked myself directly in front of the Fugaise cooking area. I hogged that front row position for the entire competition. Throughout the event, I spoke briefly with chef Don Saunders. Such a baby face! Fortunately, Sarah brought me samples to keep my energy flowing during the battle! Directly to the right of the Fugaise prep area was executive chef, Steven Brown, from Restaurant Levain. So, I was in a pretty good position to catch some crucial cooking, along with stellar views of City Pages food critic Dara Moskowitz's sexiness *meow*. (The closest thing I could find to a photo of Dara was an undownloadable pic on The Voice website here). Seth Bixby Daugherty, Executive Chef at Cosmos, briefly introduced the competitors and welcomed the guests, then the revealed the secret ingredient. Lobster!

Don from Fugaise went to town with a parsnip/cream/vanilla puree, which they served with seared lobster tails and a cabbage roll stuffed with sauteed mushrooms, fois gras and lobster knuckle meat. The claws were boiled and served on the top on the cabbage roll with a spicy paprika sauce.

Chef Steve from Restaurant Levain prepared a lobster/chorizo/truffle oil dish with shashimi-style beef (couldn't determine the cut), which smelled heavenly, and must have tasted heavenly as well, because he was the big winner of Iron Fork. His look was goofy and fun, tossled salt and pepper hair, tight-rolled chef pants, and chartreuse Crocs. His style was fun to watch. Very methodical and meticulous, but relaxed and cheery. He's the kind of guy you wish would invite you to his house for Thanksgiving, just so you could sip champagne and watch him cook.

The Lowlights: 1) More advance tickets would have been nice. 2) Each cooking station should be labeled with the represented restaurant name and chefs; it was difficult to remember who was at what station. 3) A better sound system for annoucements and on-the-spot interviews; we could barely hear Dara!! 4) Stairs; the jampacked elevators were frightening. 5) The tarragon provided for the chefs was crappy.

Lowlights aside, the event was awesome to watch and attend. I'll definitely be attending next year!

I came home after the Iron Fork event to a basement set up with gerg's drums. Dallas Orbiter was recording him in the basement, as they were all about the reverb from the staircase. I love to watch him play; it was a nice treat. gerg, you are so HAWT.

Also, I came home to a new compound mitre saw in the basement. It has a laser and a florescent light and a very cool transport stand! It was not purchased at that bad manners hardware store; it was purchased at Home Depot. gerg saved the first cut of wood for me and wrote "MARIE" on the block. It's fuggin adorable.

Other highlights from the week:

After voting on Tuesday night, gerg at I hit El Norteno. He had the steak fajitas. I had shrimp rancheros. Apparently, their Horchatas are fanstastic, but we had limonade. The beans and rice were a little bland, but the entrees were tasty. They offer a variety of traditional dishes, like, 8-10 versions of tacos. Definitely family friendly. Definitely not fancy. Atmosphere is bland, so bring interesting company. Come and eat a taco, and then buy a blessed virgin Mary devotional candle from their little shop.

Wednesday night, I prepared a new crockpot recipe. Check out the recipe and comments here! We visited our friend Brad with the recipe, and then headed down to the Town Talk Diner with my brother, MarkMartin, and our former roomie cBass. MarkMartin (visiting from Oshkosh, Wisconsin) tried out the Kitchen Sink burger, cBass had the grilled cheese. gerg and I shared some fried cheese curds and drank booze. I tried an adult malt concocted with pumpkin pie flavored ice cream, honey, and brandy. gerg stuck to the Jameson, as usual.

Looking forward to heading to a Comfort Food party tomorrow and another sort of party on Sunday. Also, raking leaves and cleaning gutters are in our future.

One more bit: today I received the first proof for my forthcoming poetry book, called Fresh Breath. We should be able to send the complete design to the publisher by December! Woohoo!!!

Did you (well, i guess could you have if you ate goose liver and pork) get to try any of Don or Steven's food? We love eating at Fugaise, and Steven's last restaurant Rockstar was one of the best food experiences I've had in the TC (Mmmmmm tobacco smoked heirloom tomato bisque). It looked from the literature that you wouldn't get to unless you were a judge.

My fear was that you'd show up, it would be a complete madhouse (we were at the Graves for new years a couple times and that ballroom gets nuts) of people drinking amstel and eating lukewarm appetizers from rudolphs and bar abilene, then watch the two good chefs in the room cook but not get to eat it. On the other hand, I would give $100 to meet Dara or at least see what she looks like.

Sounds like fun, but watching Don and Steven cook then not get to eat it would be like, I don't know, watching a live sex show with your arms tied to the chair.

No one was able to sample the competition food (aside from the judges), but I was standing close enough that I could waft the steam floating from Don's dishes towards myself to at least capture the aroma. The parsnip/cream/vanilla concoction smelled exquisite. I was about 2 feet away from him, and he set his plate about 8 inches from me. It was a struggle not to touch.

The joint WAS packed, but with so many people lined up, the appetizers were being put on the table and eaten almost immediately. I avoided the eating crowd for the most part and watched the cooking. A bonus was that people didn't seem to like the 99% chocolates from Legacy, so I had 2 and even brought one home for gerg (I asked permission first).

Plus, I got a giftbag with Lunds tortilla chips and Aveda products. AND I got to see Dara wearing a big red wig and sunglasses. AND she was adorable (and petite). Roughly 5'3", I'd guess.

OMG I am totally jealous that you got to see her!

Obviously anonynmity is key when you review restaurants, but glasses and a wig? Come on Dara!

And it gets better!

I entered First Financial's raffle for a free stay at the Grave's Hotel, and I just received a call to say that I won!