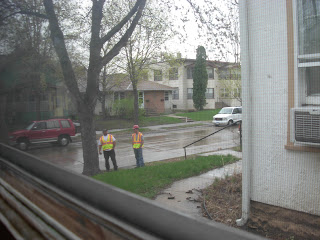 The other day we saw a work crew in our neighborhood.
It appeared they were stopping by to check on someone's pipes.

I paid special attention to them because I love blaze orange (for real) , and because they were completely willing to stand outside in the rain. 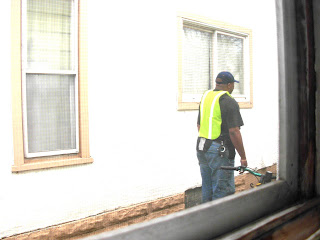 Nothing unusual, really, until I noticed something odd. One of the workers had handcuffs and, what appeared to be, a pistol strapped to his belt.
What up wit dat??

Hi
I bet these guys are turning off gas? or water... it is now the season where they can legally turn off gas and water and man do people get pissed. It seems crazy to need a gun for that but I have heard some stories from these guys that would blow your mind.

Sarah - my guess would be water, but it seemed like they were willing to wait a long time for the homeowner to show up. Does the homeowner have to be present to have the water turned off?