As such, I've been bitching and moaning about this stats class to basically anyone who will listen. Thank Gawd for Dan, who knows how to calculate complex formulas in Excel, and is willing to share his knowledge.

A recent conversation about an "incident" at Foundation and the memory of an incident involving me, Nye's, and whiskey got me thinking that it would be more fun to conduct a random, quasiexperimental survey about drunken attacks and whiskey.

Yesterday, I asked a bunch of people two questions: 1) Have you ever drunkenly attacked? 2) Was there whiskey involved? 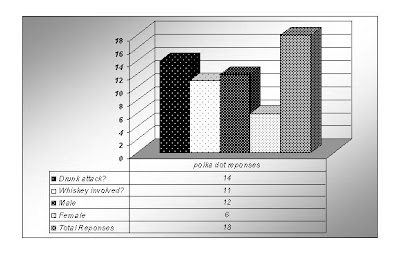 Recommendations for Future:
Take a vacation.
Read some nonfiction.
Give Dan beer.