Reetsyburger's Readers, I need your help.

Scarlet is coming to town this weekend. It rules when she comes, and it sukks when she leaves. I want Scarlet to move here, even if kitty will scratch my eyes out for trying. Kitty should just move here too. Then we could triple threat up and down the main drags. Vintage dresses and lipstick ain't a problem. I know a few boss shops. I might take her to Cliche or gh2, to show her other options around here. Depends on where we go Art-A-Whirling. I know she'll find something she can't live without.

I've got the rock show for the weekend under wraps. Scarlet adores Dallas Orbiter, and they're playing the Heliotrope Festival this weekend. Dallas Orbiter goes on at 9pm on Saturday; an $8 cover and a whole night of bands sounds rokk-tastic. I know for a fact they're rokking a new set list of badass uncategorizable spacey pop tunes. They did a tribute to Raymond Scott at the Heliotrope Festival last year, and I held hands with the drummer afterwards, which was wikked hot. *wink* 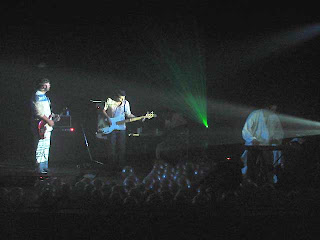 
NACHOS. Here's where I need your help, Twin Cities. Where do I take Scarlet for the best nachos in the Twin Cities? I've had Herkimer's nachos, but I usually make my own, since Alton Brown showed me how. Tell me where to take Scarlet for nachos. Please!?!

Ranty - I wrote down the address and phone number! Thanks!

You've never been there?????? It's super-popular for "after-bar" since it's open until like 3am-ish.

Keep in mind that it's trashy.... but tasty! (To borrow a quip from Psycho Suzi's)

DOOOOOOOD. When we afterbar we end up at people's houses doing strange shots of leftover booze and talking about robots, rokk, and bicycles.

Since you'll be in NE anyway, The nachos @ Bulldog are now pretty infamous and Suzi's are awesome, though good luck getting in the door and food this weekend. Since you might be taking her to gh2, you might as well cross the street to bulldog for lunch or something on Saturday. Just a thought.

I was thinking we'd save nachos for Sunday. I've heard good things about the Bulldog's nachos.

If you go Sunday, I will TOTALLY join yall for some shuffleboard.

Why haven't I ever heard of gh2?! Is it like Fashion Avenue in Edina? I need to go see this place like now.

I haven't seen anything comparable in the Twin Cities to gh2 in terms of designers and prices. HOWEVER, I have not been to Fashion Aveune either.

I purchased a skirt at gh2 two years ago that I still rock with confidence, knowing that it has retained its coolness.

You WILL find something to fall in love with. That's a Reetsyburger guarantee.

Dre got a pair of Dior pumps at gh2 for like $40 last summer, and a ton of cute tops all the time.