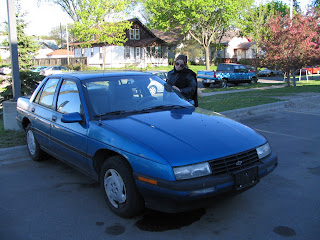 The Corsica died. It was FFS (far from sustainable).

This is not my NEW actual car, but it is the same year and model as my new car. 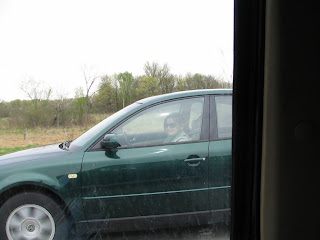 This is my actual new car.


After a little bit of searching, this lil' beaut fell in my lap from gerg's fam. 1999 VW Passat. Green. So now I drive this wikked cool car. It has a dreamy moon roof, leather seats, bun warmers, and even brights. It has a 4-cylinder engine: the 1.8-liter double overhead cam engine has been turbocharged and uses five valves per cylinder. It also has this neat Tiptronic mode, a design licensed from Porsche. I can slide the shift lever over into a separate area to the right of the normal shift gate and that permits manual shifting. A forward push on the lever causes upward gear changes, with a light pull back for downshifts. VROOM! The Corsica lacked these features.

gerg and I drove back from Wisconsin on Sunday after picking up my new car. I forgot the fm tuner for my Ipod, and I also failed to bring cds, which meant a 5+ hour drive through western Wisconsin with the radio as my companion. Imagine my surprise then, when I hit 107.1 and hear one of Dallas Orbiter's newly unreleased tracks playing! So I grabbed my cell to call gerg and tell him to tune in. NO DICE. He wasn't answering the phone. I'm waving my arms and holding my cell out through the moon roof, freaking out. I'm surprised I didn't total my new ride.

gerg finally answers the phone, and I'm like, "Dude! You missed it!!! Tune in to 107.1!" Then, another Dallas Oribiter song starts playing! He tells me that he was blasting the jams in his car and didn't hear his phone. So he hangs up to listen, and then calls me back.

And we laugh. No pre-released Dallas Orbiter on the radio, but at least I was able to listen to his Ipod the rest of the drive instead of commercial-riddled classic rock.